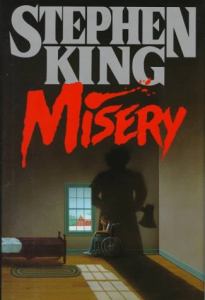 Best selling author Paul Sheldon is fortunate to have survived a deadly car crash. However, when he awakes from the accident, he finds himself held captive by a psychotic woman who claims to be his biggest fan. Unfortunately for Paul, this loony fan is disgruntled because he killed off her favorite character. Paul is forced to fight for his life and try to escape, before the woman makes good on her threats to torture and kill him.

MAY BE AVAILABLE ON OVERDRIVE/LIBBY
AUDIOBOOK

During our recent Geek Bag give-away, we learned that quite a few of you were really into Doctor Who, and if you didn’t know, Saturday, November 21, 2020 is Doctor Who Comics Day.

To celebrate this day, we'd like to tell you about a library resource, hoopla, where you can read many, many Doctor Who comics.  To check out Doctor Who comics that are available, digitally through the library, click on the link below.

Doctor Who Comics on hoopla

Besides comics, we have also linked you to some Doctor Who audiobooks to enjoy.

Doctor Who Audiobooks on hoopla

Below, you will also find some fun activities you can download and print out to help you celebrate your love of Doctor Who!  Click on the Download button below each image to download that activity.

Hope you enjoy all these Doctor Who comics, audiobooks and activities!  Have a great Doctor Who Comics Day!!! 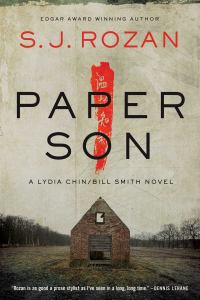 The Most Southern Place on Earth: that’s what they call the Mississippi Delta. It’s not a place Lydia Chin, an American-born Chinese private detective from Chinatown, NYC, ever thought she’d have reason to go. But when her mother tells her a cousin Lydia didn’t know she had is in jail in Clarksdale, Mississippi—and that Lydia has to rush down south and get him out—Lydia finds herself rolling down Highway 61 with Bill Smith, her partner, behind the wheel.

From the river levees to the refinement of Oxford, from old cotton gins to new computer scams, Lydia soon finds that nothing in Mississippi is as she expected it to be. Including her cousin’s legal troubles—or possibly even his innocence. Can she uncover the truth in a place more foreign to her than any she’s ever seen? 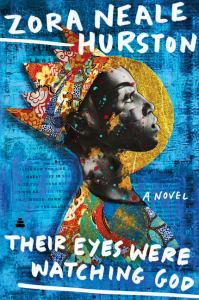 Their Eyes Were Watching God by Zora Neale Hurston

One of the most important and enduring books of the twentieth century, Their Eyes Were Watching God brings to life a Southern love story with the wit and pathos found only in the writing of Zora Neale Hurston. Out of print for almost thirty years—due largely to initial audiences’ rejection of its strong black female protagonist—Hurston’s classic has since its 1978 reissue become perhaps the most widely read and highly acclaimed novel in the canon of African-American literature.

“A deeply soulful novel that comprehends love and cruelty, and separates the big people from the small of heart, without ever losing sympathy for those unfortunates who don’t know how to live properly.” —Zadie Smith

Staying safe at home means there’s plenty of time to delve into your list of favorite classic movies, or catch up on the movies you’ve always meant to watch, but haven’t gotten around to yet.

AAPLD has made it easier for patrons to locate our classic movies by adding a distinctive yellow sticker to the spine of the DVD cases. You’ll find our new Classics collection on the first shelf of the Adult Services DVD area, facing the front entrance to the main library.

We’ve also created a link so that you can browse our collection from home, place a hold and pick up at the Main Library’s drive-through, or at the Eastgate Branch, via curbside service.

Here’s a sample of some timeless favorites to enjoy on a chilly night at home:

The African Queen (1951)  Humphrey Bogart and Katherine Hepburn.  A scruffy riverboat captain and a prim missionary reluctantly join forces to torpedo a German gunboat, and find themselves falling in love.

Love Me Tender (1956)  Elvis Presley makes his film debut in this classic about three brothers returning home  to Texas after the Civil War. The joyous homecoming is upturned when they discover their youngest brother has married his older brother’s true love. Elvis performs four songs, including the title song.

Roman Holiday (1953) Audrey Hepburn and Gregory Peck. A princess flees her staid royal life for an adventure in Rome, while an American journalist in search of an exclusive story pretends not to know her true identity.

Shane (1952) Alan Ladd A retired gunfighter comes to the aid of a family terrorized by a ruthless rancher and his hired gun. Directed by George Stevens, Shane is one of Hollywood’s quintessential Westerns.

If you prefer streaming films, you’ll find more choices available through our Hoopla and kanopy apps.

Grab the popcorn, kick back and enjoy. 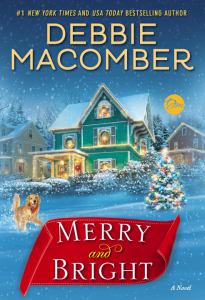 Merry and Bright by Debbie Macomber

Christmas is the season of the heart, and #1 New York Times bestselling author Debbie Macomber is here to warm yours with a delightful holiday novel of first impressions and second chances.

Merry Knight is pretty busy these days. She’s taking care of her family, baking cookies, decorating for the holidays, and hoping to stay out of the crosshairs of her stressed and by-the-book boss at the consulting firm where she temps. Her own social life is the last thing she has in mind, much less a man. Without her knowledge, Merry’s well-meaning mom and brother create an online dating profile for her—minus her photo—and the matches start rolling in. Initially, Merry is incredulous, but she reluctantly decides to give it a whirl.

Soon Merry finds herself chatting with a charming stranger, a man with similar interests and an unmistakably kind soul. Their online exchanges become the brightest part of her day. But meeting face-to-face is altogether different, and her special friend is the last person Merry expects—or desires. Still, sometimes hearts can see what our eyes cannot. In this satisfying seasonal tale, unanticipated love is only a click away.

Since 1990, November has been designated as Native American Heritage Month, when we recognize the cultures, contributions and struggles of America’s indigenous people. According to Native Hope, an advocacy organization for the Native American community, there are an estimated 6.79 million Native Americans currently living in the United States, and 574 federally recognized tribes.

Unfortunately, the languages and cultures of many of those tribes has been lost, but the tradition of storytelling is not only helping to preserve Native American heritage within the community, but increase awareness outside it.

Libraries play a vital role in helping patrons access the work of Native American writers, including best-selling authors Louise Erdrich, Sherman Alexie, Tommy Orange, and Joy Harjo, a member of the Creek Nation, who was named the 23rd Poet Laureate of the United States in 2019

We’ve listed works from our digital and print collections by Native American writers, that include history, literary fiction, poetry, young adult fiction, junior fiction, memoirs and more. Digital selections marked with an asterisk are also available in print. Click on the titles to place a hold.

Give Me Some Truth by Eric Gansworth*

Moon of the Crusted Snow by Waubgeshig Rice*

The Round House by Louise Erdrich*

Future Home of the Living God by Louise Erdrich*

The Beadworkers by Beth Piatote*

Our History is the Future by Nick Estes*

Where The Dead Sit Talking by Brandon Hobson*

There, There by Tommy Orange*

The Heartbeat of Wounded Knee by David Treuer*

Trail of Lightning by Rebecca Roanhorse*

The Night Watchman by Louise Erdrich*

The Marrow Thieves by Cherie Dimaline

Bury My Heart at Chuck E Cheese’s by Tiffany Midge

As Long As The Grass Grows by Dino Gilio-Whitaker 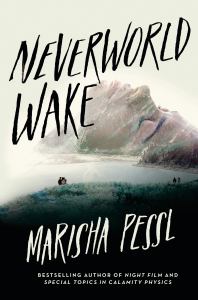 It’s been one year since graduation, and Beatrice Hartley has mixed feelings about joining her friends a weekend reunion.
She’s right to be worried. After a night out, they narrowly avoid a collision with a car on a deserted road. Or so they believe.
Back at the mansion where they are staying, a mysterious man knocks on the door during a raging storm. He tells them that they must make a choice: one of them will live, and the rest will die. And the decision must be unanimous.
Soon time backbends. Beatrice and her friends are forced to repeat that dreadful day so many times they lose count. With each replay, events twist and fears come alive in horrifying ways.
This nightmare, this nothingness . . . this is the Neverworld Wake.
To escape, they have to vote. But how do you choose who to kill? And then how do you live with yourself?
“Beautifully creepy.” —The New York Times
“You wont be able to stop reading until the mystery is unraveled.” —Refinery29
“A dark and twisty tale brimming with psychological suspense.” —Bustle 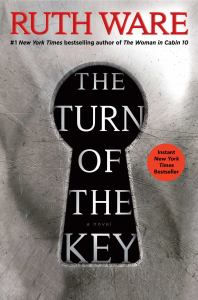 The Turn of the Key by Ruth Ware

When she stumbles across the ad, she’s looking for something else completely. But it seems like too good an opportunity to miss—a live-in nannying post, with a staggeringly generous salary. And when Rowan Caine arrives at Heatherbrae House, she is smitten—by the luxurious “smart” home fitted out with all modern conveniences, by the beautiful Scottish Highlands, and by this picture-perfect family.

What she doesn’t know is that she’s stepping into a nightmare—one that will end with a child dead and herself in prison awaiting trial for murder.

Writing to her lawyer from prison, she struggles to explain the events that led to her incarceration. It wasn’t just the constant surveillance from the home’s cameras, or the malfunctioning technology that woke the household with booming music, or turned the lights off at the worst possible time. It wasn’t just the girls, who turned out to be a far cry from the immaculately behaved model children she met at her interview. It wasn’t even the way she was left alone for weeks at a time, with no adults around apart from the enigmatic handyman.

She knows she’s made mistakes. She admits that she lied to obtain the post, and that her behavior toward the children wasn’t always ideal. She’s not innocent, by any means. But, she maintains, she’s not guilty—at least not of murder—but somebody is.

Full of spellbinding menace and told in Ruth Ware’s signature suspenseful style, The Turn of the Key is an unputdownable thriller from the Agatha Christie of our time.