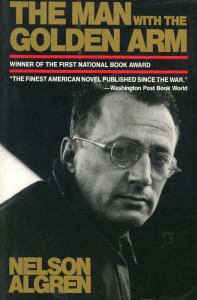 Man with the Golden Arm by Nelson Algren

A novel of rare genius, The Man with the Golden Arm describes the dissolution of a card-dealing WWII veteran named Frankie Machine, caught in the act of slowly cutting his own heart into wafer-thin slices. For Frankie, a murder committed may be the least of his problems. The literary critic Malcolm Cowley called The Man with the Golden Arm “Algren’s defense of the individual,” while Carl Sandburg wrote of its “strange midnight dignity.” A literary tour de force, here is a novel unlike any other, one in which drug addiction, poverty, and human failure somehow suggest a defense of human dignity and a reason for hope.